Purr-resident Trump struggling to force the umbrella through the doors. Circle peg rectangle hole?
The A-meow-ican Purr-resident, the most powerful cat in the world, has once again made a fool of himself. After completing a rally, Trump is seen walking up the stairs leading to Air Force One with an umbrella in hand. As the pilot opens the door for him, Trump is seen struggling for over 69 seconds trying to force the umbrella into the entrance to Air Force One. Feeling bested by the umbrella, Trump drops the umbrella at the door leaving that monumental task for Secret Service to take care of.
Shortly after getting on the plane, Purr-resident Trump hopped onto his Twitter account to let out his rage. He blamed mainly the Fake News media and a broken Umbrella. 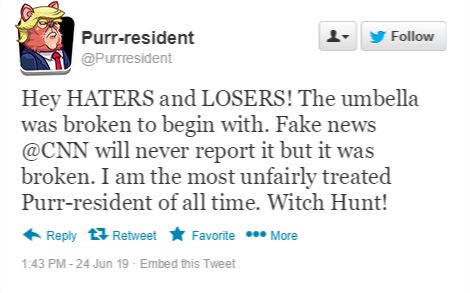 Purr-resident Trump on a Twitter rampage about an Umbrella Witch Hunt.
An anonymous White House Representative caught up with Meow York Times and confirmed that the Umbrella was in fact in perfect working condition.
"Unfortunately the Umbrella is in full working order. We knew this would happen. The entire staff was worried when we received word that the weather would not cooperate and it would be raining cats and dogs. This would be the Purr-resident's first time using an umbrella on his own. We made sure to include in the morning brief clear instructions of how to close the umbrella. Knowing that the Purr-resident doesn't like to read, we brought in one of the top artists in the country to illustrate the instructions so he can just look at the pictures. Instead, he folded the documents into a paper airplane and threw it at his chief of staff." 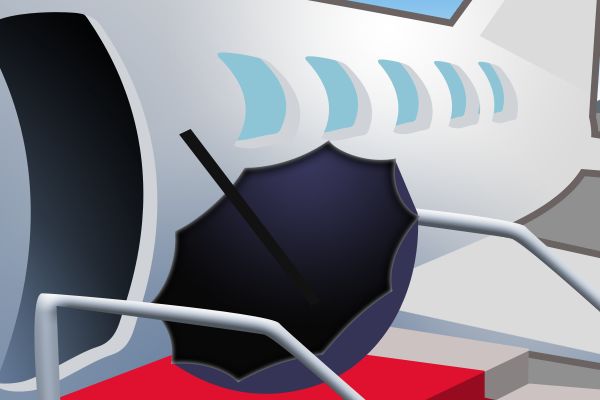 A lone victorious umbrella sits atop the Air Force One podium having bested one of its greatest beasts.