Melania Trump’s “Becoming An American” and Michelle Obama’s “Becoming”
Insider sources have confirmed that Melania Trump is set to release a new book titled "Becoming an American". The book dives deep into Melania's accomplishment of marrying Donald J. Trump and exploiting that as her starting point of becoming an American. In her memoir, a work of deep reflection and mesmerizing narrative, Melania Trump invites the readers into her path to citizenship. She cites many key points in her life that have gone awry but bounces back with her breathtaking come-back stories. It is in those experiences that have shaped who she is.
Melania's release reveal was leaked to Meow York Times just as Michelle Obama won a grammy for her audio version of her book "Becoming". Critics to Melania have stated that many elements of "Becoming an American" were plagiarized from Michelle's book.

"For many women, including myself, "American wife" can feel like a loaded word. It carries a history. If you grew up in the 1960s and 1970s as I did, American wives seemed to be a genus of white women who lived inside television sitcoms - cheery, coiffed, corseted. They stayed at home, fussed over the children, and had dinner ready on the stove. They sometimes got into the sherry or flirted with the real-estate mogul, but the excitement seemed to end there.

The irony, or course, was that I married the real-estate mogul."

Sources also provided an excerpt of an early draft where Melania forgot to change certain key words that would not have applied to her.

“…Donald makes this comparison with a touch of envy, because his own childhood was so different, but also as a way to push back on the entrenched stereotype that African Americans primarily live in broken homes, that our families are somehow incapable of living out the same stable, middle-class dream as our white neighbors.”

This is not the first time that Melania has been accused of plagiarism. During the Republican National Convention, eagle-eye viewers called her out on parts of her speech that highly resembled Michelle Obama’s. Although the speech was not matched verbatim, they did bear considerable similarities in composition.
Meow York Times have obtained an exclusive copy of the cover. Do you think the book cover resembles Michelle Obama’s? 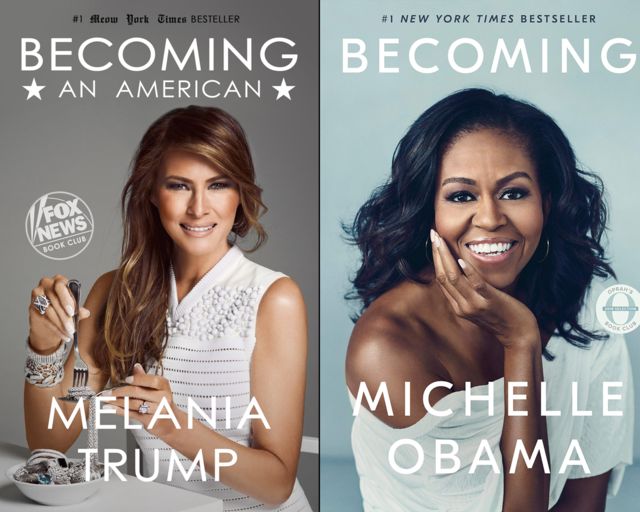 After new polling showed that 53 percent of Republicans said Trump is a better president than Lincoln, Trump decided that he deserved a place among the historical elite presidents.
By Sean Potluck Hammity

Trump takes over Lincoln’s spot not only in the polls, but also on Mt. Rushmore.